⭐ FREESHIP FOR ORDERS FROM 50 USD

😷 Avenge the Virus with a FREE Mankini Store face mask. GET IT NOW

A western man wearing a helmet and sports shoes sits on a motorcycle, wearing an eye-catching blue and banana mankini.

The image of a group of strangely dressed foreign “backpackers” in Ha Giang is being shared a lot on social networks. In the foreign group of “backpackers”, a prominent man in a helmet, sports shoes is sitting on a motorcycle and wearing a very eye-catching blue and banana swimwear.

According to the person who posted the series of photos on social networks, the photo was taken on the afternoon of October 13 and the strange fashion style of the foreign man in the group attracted a lot of attention from the people around.

The familiar clothes of “people” are usually clothes that cover the body because if they leave their skin exposed, they will be susceptible to colds, heatstroke, wind … when traveling. Therefore, the unbelievably cool outfit of the West guy in the picture surprised many people. 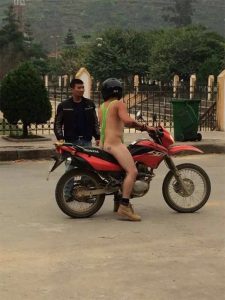 This image is being shared on social networks

If based on the characteristics of the suit in the picture, it can be confirmed that this is a design of mankini thong (string bikini for men) specializing in going to the beach, swimming pool …Wearing swimming costumes to travel in the mountains, foreign riders are really shocked by their unique fashion personality.

In fact, the green and banana thong mankini itself that this “Western guy” is wearing is not what Westerners consider normal. Mankini thong became famous after being worn by Borat’s character in the comedy “The bizarre reporter”.

In some places, wearing mankini thong is also considered illegal. On the beach in Newquay, England, for example, the police are determined to arrest and punish men wearing string mankinis. This action was explained by them to clean up the image of the resorts.

However, there are still many opinions that mankini thong is a very normal swimwear, women with string bikini, men also have the same thing. They think it is equal rights.

Offered in the country of usage